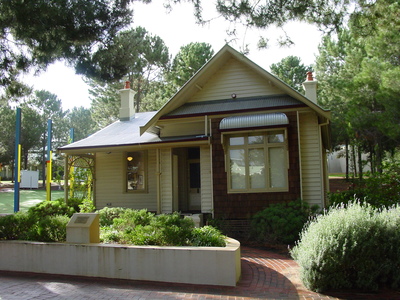 Edith Dircksey Cowan, OBE, JP, was the first woman member of an Australian Parliament, elected to the Legislative Assembly of Western Australia as a member for West Perth 1921-1924. Edith, her husband James and their family resided at 71 Malcolm Street from 1919 for approximately 20 years. It was was an unpretentious, traditional home with very few modern appliances, despite Edith Cowan's advocacy for women's liberation. Edith Cowan University purchased the house in 1991 and it was reconstructed on the site with the assistance of the West Coast TAFE. The reconstructed house was opened on 2nd November 1997 by Emeritus Proffessor Geoffrey Bolton, AO. It is now used by the Peter Cowan Writers' Centre, a non-profit organisation which strives to be supportive of new writers.